Also, posted below with pictures.

Joe Martin is the race that gets me to do intervals in February when there is 12 inches of snow on the ground.  It’s a huge race with tons of talent at just the right time of year for winter motivation.  I’ve done it twice now; last year was pretty pathetic I was one of the last places in the time trial, lost about 20 minutes each of the two road race days and then got pulled half way through the crit.  This time around would be different I told myself, I knew the courses, had a better idea of the competition and was more motivated.  I set some lofty goals to get myself ready both in terms of power numbers and weight.  Now you think I’m going to tell you that I killed it and crushed those goals, nope I think I missed every single one of them.  That turned out to be ok it gave me something to shoot for and getting most of the way there put me in a solid spot on the starting line.
The race allows teams of up to 8 and so we sent a full squad this year (as did many teams) including our 3 cat 1’s Tyler (here on out Bone Collector), Jake (Big Smokey) and Diesel (I’m not even sure he has a real name).  After those 3 guys leading our team we had Austin (who’s been riding strong in California all winter) and myself who were both part of the team last year and 3 new guys to the 1/2 JM race in Nikos, Fay and Aaron (Baker Soda).  Everybody had different strengths and weaknesses and I think we put together one of the most solid teams at the race.  No superstar sprinter or 120lb climbing TT specialist but overall not a weak link anywhere.
The race takes place down in Fayetteville, Arkansas so via all different methods and over several days we made our way to the Airbnb house that we’d stay in for the race.  We also had Courtney, Katie Sue and Wilfred (when he decided to pay us a visit) in the house so we crammed in pretty tight.  The house could not have been located in a better spot, right downtown, 3 doors down from the crit course and equally as important, a really good coffee shop.  The Time Trial started the race off; it was a new course this year, still at Devil’s Pen state park but going the other direction up from the river and a bit longer at 3 miles.  Essentially 2 miles of switchbacks and elevation gain followed by another mile of rollers at the top.  I was nervous, am I really in better shape than last year?
You never feel fully prepared when you finally get to the thing you’ve been training for.  We thought Big Smokey would be our best finisher but Baker was a wildcard with all his Tucson riding and maybe myself or one of the other guys could have a surprising result.  When the dust finally settled Big Smokey was our top placed rider in 23rd of the 120 starters.  He was closely followed by Diesel, Bone Collector and then the rest of us.  We were all sort of in the middle, we were solid, not great not horrible but now we knew where everyone stood.  Riders came from all over including a Japanese cycling champion and Columbian and Canadian teams so we knew this wouldn’t be easy.

That night we reviewed the route and profile for stage 2, the 110 mile road race, and came up with the game plan.  The big feature on the 2nd day is Gaylor Mountain, a 10 mile climb that begins at mile 71, its not steep, in fact it only averages 2.9% but after a few hours in the legs it hurts, and it whittles down the field.  After Gaylor, everyone that’s left bombs down the next 30 miles in a fast run in to town.  The finish is tricky though, with about 1K to go there is a left turn then quick right followed by some rollers before a right turn to the uphill finish.  The plan was to put together a lead-out for Jake to try to steal a few seconds in the time bonuses, or at the least with some splits over the final rollers that were certain to happen.  Well now we had our plan at least.
I was the lucky one that got to sleep on the couch so the next morning I woke up to the warm aroma of Diesel and Big Smokey making coffee with the aeropress, we all sort of fell into different roles, theirs became coffee duty.  We had a long morning before the race so we did all the normal stuff, we ate, worked on bikes (this became my role), drank enough coffee to support a local coffee shop, pinned numbers, etc…  It was nice to be close enough to the start of the race to leave the vehicles and ride over so we rolled over the couple miles to the wal-mart parking lot where the race began.  Finally we could see the competition, in a TT you miss so much because you’re so focused on your race and you’re not all out on the course together.
So we were off, one thing that makes Joe Martin so cool is what’s called rolling enclosures, a police escort to use the entire road for the whole race.  When there’s oncoming traffic the cops ahead push them off to the side of the road and we got to use all lanes, it makes for a funny feeling when you’re so used to the yellow line rule that many of the smaller races enforce.  There was a feed zone at mile 41 with a 1-2 minute hill where things got fast but other than that the race was pretty chill going into Gaylor.  We lost Baker to a flat around the first feed zone but otherwise we had 7 of 8 guys with us at the base.  Half way into the climb I felt good, surprisingly good.  Fitness was there and I finally knew I’d get over that hump (haha) that burned me so bad last year.  When we finally made it to the top we lost a couple but still had 5, we were headed down for the finish to execute the lead-out.  For me, I didn’t have much in the way of legs especially when things started getting fast at about 10 miles left. 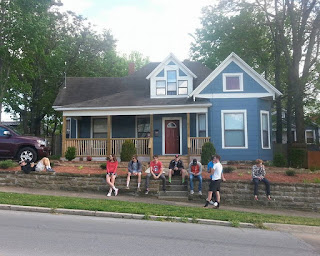 I could hang but wasn’t able to help beyond that.  It was up to Austin the Bone Collector and Diesel to get Jake where he needed to be.  Austin did his thing getting those guys in position with a couple K left then handed the rains to the Bone Collector and it was a beautiful thing watching him lead Diesel and then Big Smokey through the quick left right corners with the whole peloton in tow.  They dropped Jake off on the top of one of the rollers before the finish to slog it out with whoever else could maintain the pace on the rollers.  There was still a long way to go so we wouldn’t know how it finished until we reached that point ourselves.  It turned out Jake got us our first top 10 of the weekend with a 7th place, and all the sudden we gained the confidence that would come along with making a plan and being able to execute.  It turned out to be a pivotal finish for us because with several riders up towards the front we knew we’d gain time with splits just like in previous years due to the difficulty of the finish.  Due to a crash with about 1k to go they ended up same timing everyone that made it over Gaylor Mountain which was over 60 guys so unfortunately without the time gaps it wouldn’t matter where you placed.  It took what would have been a major GC shakeup and essentially made it so any racing at the finish was unnecessary.  That stung a bit as time gaps would have clearly given us all a big jump in the GC standings. 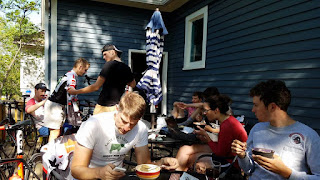 Day 3 was an 86 mile road race, a ‘stick’ followed by 3x 23 mile loops.  Last year there were major selections on this day with only about 1/3 of the field going to the line together.  Personally this day was hell; I barely hung on to the group I was with that lost 20 minutes.  Yesterdays race gave me some confidence but I knew today was tougher.  Each lap there is a solid vo2 effort climb which sheds some of the field and most of the rest of the lap is flat or downhill where you can recover if you sit in.  This year the race was a lot chiller and it showed with 80 riders coming to the line, most of the action came in the last 5 miles on the run in where we had a tailwind and were flying to the finish.  It was a constant battle to move up or even just hold position.  There was bumping and some yelling but at this level people are pretty good bike handlers and everyone kept upright.  In the end it was Tyler who took our top spot this time with another top 10.  Every single teammate made it to the finish, I was astonished. 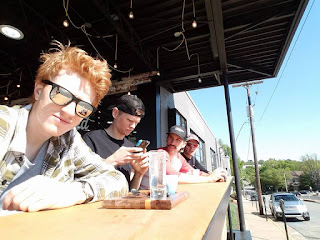 I was sitting in 53rd, Jake was our best placed rider in 22nd, and we needed a hard day with some real splits or to get in a breakaway to have any chance to move up.  I was finally feeling confident in my abilities this year and felt as good as I had all week.  My legs are funny that way, they need a little warming up, I was ready for hard, actually hoping for it, the crit was the last chance to have a solid placing and as a team the last chance to crack the top 20.  I remember the day well last year, legs were dead, body was dead and all I wanted to do was stick in the race long enough to not be time cut, not the best mental spot to be in.  I was confident this year would be different. 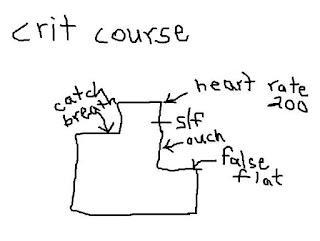 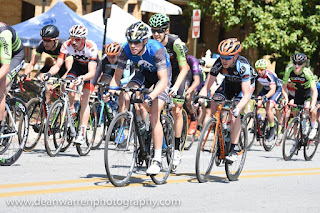 The crit is 8 corners with a pretty steep climb on the finishing straight with a leg zapping false flat leading into it.  The race was hot from the gun, I learned my lesson last year and stayed in the top 30 wheels at all times, or at least that was the goal.  It was hard there weren’t too many time we’d have an easy lap to look around and I was confident we’d be moving up.  With 5 laps to go I looked back and saw the field had dwindled quite a bit.  On the final lap I came around the second of last corner and was starting to get gassed, my guys passed me, I was happy to see they still had legs for a strong finish.  I gave it everything up to the line, Tyler killed it again taking another top 10.  The field was decimated; only 30 guys made it to the finish line, 5 of them were us.  Tyler’s result made for 3 out of 3 days of top 10 finishes for the team.  In the end Jake jumped 4 spots to 18th giving xXx a top 20 on GC.  Diesel, Tyler, Austin and I all moved up considerably to finish GC the top 40, or top 1/3 of starters.  Fay, Nikos and Baker all had solid results as well finishing their first Joe Martin 1/2 race which is a hard enough task on its own.

The crew we had down there was the best part about the weekend, everyone was selfless both on and off the bike.  I’m looking forward to many more of these adventures as the year goes on, and remember as Diesel always says when in doubt Slap it in the Big dog.